The result was astonishing after the crop season of watermelon was applied and obeyed completely by the process of using bio-organic fertilizer Goldtech G05 in certain households of Tien Cuong commune, typically in the household of Mr. Chuyen (living in Thien Kha village, Tien Cuong commune; his phone number 0975244360). Sharing with the management board of doctors, he commented, "Since I applied the Goldtech fertilizer G05 to my watermelon gardens, I’ve gained very high efficiency, low rate of died plants (the mortality rate is only 1 - 2% meaning that only 2-3 plants were died in each bed). After the plants have 4 true leaves, the plants grow very fast. Especially in the past years, various thrips sucking watermelon appeared a lot, but in this year they are almost absent. Moreover infection rates of powdery mildew and downy mildew decreased up to 40% and watermelon leaves became bigger, thicker, and stronger. In the past time, the input costs for each 360m2 of watermelon cultivated land comprised cost of inorganic fertilizers (1,000,000 VND) and cost of pesticides (800,000 VND). But in this year, after using the bio-organic fertilizers Goldtech G05, I just paid 500,000 VND for inorganic fertilizers (decreased 50%) and 600,000 VND for pesticides (decreased 25%). This year's yields averaged 1.3 tonnes per 360m2 meaning that it increased 30% compared with the previous year (1.05 tonnes per 360m2). Harvest time is also shortened to 25 days instead of 28 days as usual. Watermelon fruits are firm, so sweet, and get 4.5kg in averaged fruit weight. As previous years, the almost leaves near the harvest time used to be withered but in this year the leaves are still healthy and green even during harvesting time. In this year, owing to the use of bio-organic fertilizer Goldtech G05, the price of watermelon fruits is also higher than that of other farmers (not using the fertilizer). The average price of the fruits of other farmers is 8,000 VND/ kg, while my fruits are sold with the price 8,700VND – 9,000VND/ kg. I am very grateful to the company for providing such support and guidance to me and the other farmers."

A technician of the company is instructing Mr. Chuyen in steps of soil treatment.

This is image of watermelon fruit in Mr. Chuyen’s field after harvested 10 days.

This is image of watermelon fruits after harvested and content smile of Mr. Chuyen. 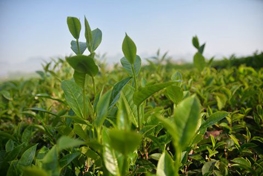 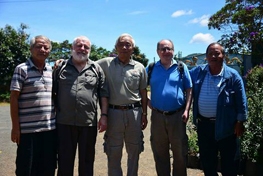